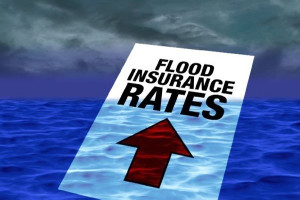 Flood insurance rates are set to increase for all policyholders today as the National Flood Insurance Program continues to dig itself out of $24 billion in debt incurred in the wake of hurricanes Katrina and Sandy and other recent emergencies.

That means policyholders and their insurance agents will once again be forced to wade through a bewildering barrage of bureaucratic lingo like “Lapsed and reinstated pre-Flood Insurance Rate Map (Pre-FIRM) policies,” “Pre-FIRM primary residences,” “preferred risk,” “standard rated,” “Biggert-Waters” and “Homeowner Flood Insurance Affordability Act of 2014.”

And those phrases are from just two paragraphs of a news release Thursday from state Insurance Commissioner Kevin McCarty’s office alerting Florida residents of the coming rate increases.

McCarty says it’s important for Florida residents to carry flood insurance on their property. Of the National Flood Insurance Program’s 5.1 million policies, about 1.8 million are in Florida.

“Although Florida’s hurricane season has been mild over the last 10 years, it is important that we not forget how easy it is for one storm to cause a great deal of damage and destruction from flooding,” the news release quoted McCarty as saying. “Tropical Storm Fay is a good example of a storm that made slow progress through the state leading to massive flooding problems for several Florida counties back in 2008.”

But those increases will vary depending on whether buildings are primary homes, built prior to the 1980s, in flood hazard zones, or have been paying artificially low premiums since flood zone maps were first created in the 1980s.

Flood insurance rates are based on flood zone maps developed and revised by FEMA for each county in the U.S. The maps estimate how high flood waters will rise after a storm likely to occur once every 100 years.

Homeowners with mortgages backed by a federal lending guarantor such as Fannie Mae or Freddie Mac are required to carry flood insurance if they live in a special flood hazard zone. Flood hazard zones are typically near the ocean, the Intracoastal Waterway or canals, or in low-lying areas.

In South Florida, most of these hazard zones are located east of Interstate 95 and are identified on flood zone maps as zones A, AE, AH or VE.

Broward County’s flood zone map was revised in 2014, and tens of thousands of homeowners were removed from mandatory flood insurance zones. Properties that are not in mandatory flood insurance zones are identified on flood maps as X zones. A revision of Palm Beach County’s flood map is expected to be finalized by the end of the year or early 2017.

In 2012, after hurricanes Katrina, Sandy and other major storms plunged the flood program deeply into debt, Congress enacted the Biggert-Waters Flood Insurance Reform Act of 2012, which was intended to remove government discounts and bring insurance rates charged for risky properties up to levels reflecting actual risk. But many owners of those risky properties were enraged by the increases in their renewal notices in 2014, and they pressured Congress to throttle back on the rate of increases.

The result was a 25 percent annual limit on rate increases for properties in flood hazard zones, paid for with a new surcharge imposed on all property owners.

Here’s a breakdown of the most-common property types and rate increases their owners will face as of Friday:

Property owners should purchase insurance by May 1 if they want to be covered at the start of hurricane season on June 1, according to the news release from the state insurance commissioner. Coverage is now offered by several private insurers at rates comparable to the National Flood Insurance Program, and to cover values exceeding the federal program’s limit of $250,000 per home and $500,000 per business, the release said.

For more information, flood insurance customers are urged to contact their agents or go to floodsmart.gov.

OUR TEAM AT VACAY & CO ARE LOOKING FORWARD TO ASSISTING YOU WITH ALL YOUR REAL ESTATE NEEDS.